Getting Started With DirectX Raytracing

In my previous post I talked about what raytracing is and what it does. This one is more of a tutorial/guide on getting started with DirectX Raytracing.

This post is based off the documentation I wrote during my internship last year at DAE Research, slightly edited in places where some things were missing or needed some clarification. My aim for this is to be the one-stop place for anyone who’s starting with DirectX Raytracing. It is basically what I would’ve personally wanted to have when I was getting started.

The only additional step we have to do for MiniEngine DXR is to retrieve an ID3D12Device5* from the device. This is the earliest device version that supports ray-tracing. There currently are newer versions available, but this version should be all we need for this post.

Creating a root signature with the RootSignature class in the MiniEngine is really simple:

Good candidates for parameters in the global root signature are: the raytracing output buffer, acceleration structure, mesh info…
In general: parameters that are needed across all shader stages.

Local root signatures also have a larger limit on the amount of shader records they can hold.

Although DirectX Raytracing shaders are very similar to normal HLSL shaders, they do have some extra features to facilitate raytracing.

The most important thing to note is that raytracing is only supported in Shader Model 6.3 and above. In MiniEngine, shaders are built with Visual Studio, you just have to add them to the solution. In the file options, make sure to set the item type to “HLSL Compiler”

To compile a raytracing shader in Visual Studio, make sure to add it to the solution, remove the Entrypoint Name, set the Shader Type to “Library” and set the Shader Model to “Shader Model 6.3”. Higher Shader Model versions should also work, but that may depend on the compiler and Windows SDK version you use.

A raytracing shader also needs to have an “attribute” on the shader function. An attribute looks as follows: [shader("shadertype")], where you replace shadertype with the type of the shader (the exact attributes will be shown in each section below).

To declare a ray generation shader, assign the following attribute to your shader function: [shader("raygeneration")]

A ray generation shader in its essence will look something like the following:

With this RayDesc structure now filled in, we can make a call to the TraceRay function:

Important to note: the TraceRay function can be called from the Ray Generation shader, Closest Hit shader and the Miss shader. This is especially useful if you want to e.g. render reflections, as you can just call another TraceRay in the Closest hit shader.

Besides the TraceRay function, there is also the TraceRayInline function. The inline version offers the same functionality as the normal TraceRay function, except that it doesn’t make use of separate shaders for hit and miss etc. The shader that calls TraceRayInline has to control what the raytracer does. A more in-depth explanation can be found here: DirectX Raytracing (DXR) Functional Spec.

This shader is invoked when the ray does not hit anything at all. To identify a shader as a miss shader, use the [shader("miss")] attribute. A common use for this shader is to sample from an environment map.

The hit shaders are executed when a ray intersects with a triangle in the acceleration structure. There are two different types of hit shaders:

The Closest Hit shader can only get invoked once per ray, at the closest intersection with an object. Most of the shading work should be done in this shader. The attribute used for this shader is [shader("closesthit")].

The Any Hit shader is called every time a ray intersects with a triangle. They are very useful to calculate transparency in objects, as they can tell the API to ignore the current hit and continue searching for other hits. Any Hit shaders are defined by the attribute [shader("anyhit")].

To prevent heavy performance impacts, it is good practice to keep the Any Hit shaders as trivial as possible, because they can get called many times per TraceRay() call.

An example of an any hit shader:

Callable shaders are shaders that can be invoked from another shader, by using the CallShader(...) function. A callable shader can be used to group common behavior together, and reduce duplicated code across the shaders. For my simple example, I didn’t find a use case to use a callable shader.

In order to declare a shader as a callable shader, you have to use the [shader("callable")] attribute on the shader function.

The acceleration structure is key to real-time raytracing. It is a Bounding Volume Hierarchy (BVH for short) which can be efficiently traversed to calculate ray-object intersections. In DXR this BVH exists of two levels: a Bottom-Level Acceleration Structure (BLAS) and a Top-Level Acceleration Structure (TLAS). The BLASes hold mesh data, along with a transform matrix. Each TLAS then holds an instance of a BLAS, along with a transform matrix. 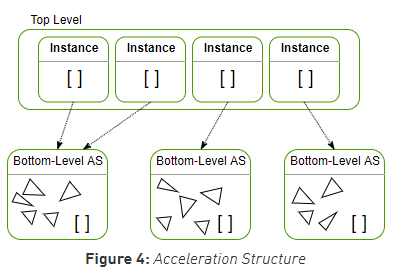 To create the BLASes, we need to first describe the geometry that it will take in. In my case, I decided to have one BLAS for each model in my scene, and merge all the meshes in a model into the same BLAS, but your approach could be different.

Now that we have the geometry descriptors, we can create the BLAS create structs:

With our scratch buffer created and our BLAS descriptors set up, we can create the BLASes:

Now that we have our BLASes created, we can create the TLAS.

If we want to animate our scenes now, we would need to completely rebuild the acceleration structure from scratch. As you can guess, this would cause a huge performance impact. Luckily we can avoid this by “refitting” the TLAS, which is much faster than a complete rebuild.

Since refitting was out of scope for my internship and this post, I kindly refer you to the NVIDIA DXR tutorial on refitting.

In a rasterized pipeline, we always know what part of the scene we’re rendering at any one point. However, we don’t have that luxury in raytracing, since two rays might get bounced around, hitting two totally different objects (e.g. one just a normal mesh, the other might hit a transparent object, etc…).

This is why we need a Shader Table: it holds all the shaders we might possibly need during raytracing. While raytracing, the API then indexes into the shader tables and uses the specified shader, depending on the current context (Did the ray hit anything? If yes, what did we hit? Was it a normal triangle? Was it something which requires a custom intersection shader? Which hit shader should I even run? etc…)

In the simple case of a hello-dxr, we only need 3 byte address buffers to store our shader tables:

We can now start creating our shader tables. We’ll need some extra helpers to get started first though:

Creating the hit shader table is a bit more complicated, and will vary depending on what data you need access to in the hit shader. A simple pass where you output the mesh texture color might look something like this:

The raytracing pipeline groups all the objects together that are required to kick off the raytracing. These are: the shaders, hit groups, shader associations and the global root signature. The DirectX 12 helpers library (available at: microsoft/DirectX-Headers) is a very useful tool to quickly set this up, because it abstracts away a lot of boilerplate code.

To create a pipeline, we start off by creating the pipeline descriptor:

Then, we add our shaders to the pipeline: (repeat this for each shader)

g_pShader is the bytecode array which is output by the shader compiler in Visual Studio, and L"ShaderMainFunction" is the name of the main function in your shader. This is the one with the shader identifier attribute.

After that, we add the hit group(s): (again, repeat for each group)

Next, we add the shader config:

In this example, the ray payload only has 1 float for the distance, and we’re using the built-in attributes (BuiltInTriangleIntersectionAttributes) which only has a float2 barycentrics as data. (spec)

Next, we add the local root signatures: (repeat for each shader)

m_ShaderLocalRootSig is of type RootSignature which is provided by the MiniEngine, and filled in later in the code

Then, we move on to adding the shader associations: (repeat for each shader)

Next, we bind the global root signature:

Finally, we bind the pipeline configuration:

The maxRecursionDepth defines how much recursion we can have (some effects like reflections need to trace secondary rays from a ray hit point). In my example I only used primary rays, so a maxRecursionDepth of 1 worked just fine.

Now that everything is bound to the pipeline descriptor, we can finally build the pipeline:

This can fail, so make sure you check the HRESULT for errors!

Passing data to a local root signature is a bit more difficult, because you have to bind the data to a shader table, which can hold any arbitrary data. You are expected to set the memory directly, but it’s not too difficult with some pointer offset tricks.

Now that we know what our entries are and how big they are, we can calculate the offset of a shader record by just adding all the sizes of the previous shader records together.

Important to note is the first shader record: the hit group identifier. It is a mandatory field, and DXR expects us to set it, so that DXR knows to which hit group this shader stage belongs to.

To render everything correctly, we first have to make sure to bind our output buffer as our render target:

As you can see, we also need to transition the output buffer to be a UAV, so that we can properly access it and write to it from the shaders.

Next up we bind the descriptor heap:

After that, we bind the global root signature and its parameters

Then we can bind our raytracing pipeline:

Now that we have everything we need, we can finally tell DXR to kick off the raytracing. In order to do this, we have to fill in the D3D12_DISPATCH_RAYS_DESC struct, which will hold our shader tables and thread grid dimensions (similar to compute shaders).

Once we have that filled in, we can finally call DispatchRays:

When we’re done with raytracing, we can now use our raytracing output buffer however we like. In my example, I simply copied it to MiniEngine’s “backbuffer”:

And that’s it! If everything went well, you should now have your scene being raytraced. In case you got stuck on something, I recommend going through the references linked below. They were the major ones I used when setting up DXR for the first time. I also point you to my own repository where you can find all the source code I wrote during my internship. Everything in there should be working fine(tm).

If you haven’t yet, I also recommend giving my previous post a read, where I ramble about raytracing in games and stuff. If this post was a bit too much over your head, I think you’ll enjoy that one. :)

These are my most-used documentation pages and tutorials that I used while getting my feet wet with DXR. I highly recommend going through these, because they contain a ton of information.